“Roodylib,” my collection of updates to the Hugo library files, just had its 4.0 update. I feel that it’s come a long way and has plenty of nice bug fixes and added functionality. I’d hope that any Hugo author checks it out. I’ve uploaded it to the IF Archive (should be in “unprocessed” right now), but you can always download the latest official version here, too: Roodylib 4.0

Windows Hugo users new and old may also be interested in a Notepad++ package I’ve put together for Hugo (this seems allowable by its licensing as it only insists that info remains intact for finding the official Notepad++ site and I did not delete any of the included readme’s). It adds several toolbar buttons for easy compilation and running games, and it handles directory management (one of the trickier things, IMO, for the budding Hugo author). Best of all, it’s a standalone program so it can be put on a USB stick and carried from computer to computer. Download Hugo Notepad++

Lately I have been using sublimeText for Hugo development. I find that the syntax language called “Go” is pretty close to Hugo. It messes up a bit with quoted strings sometimes, but it’s usable.

Is anyone using IntelliJ IDEA for development? For IF or non-IF stuff? If not I won’t get into it, but I’ve always wanted to use a real IDE for text game programming.

Is anyone using IntelliJ IDEA for development? For IF or non-IF stuff? If not I won’t get into it, but I’ve always wanted to use a real IDE for text game programming.

I’ve used it in the past when I wrote Java, and I’ve used the other JetBrains IDEs a few times (PhpStorm, Android Studio, the ReSharper plugin for Visual Studio).

These days I’m using JOE for editing ZIL code. It’s a good fit because it can balance angle brackets and do recursive syntax highlighting (since commented-out code can be delimited by nestable brackets): 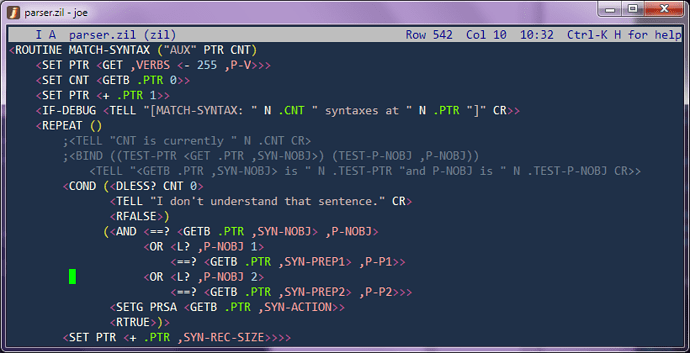 My last attempt to do IF in a realish IDE was Yomin, but when I realized I was going to duplicate a lot of what Visual Studio already had, I decided to make it a Visual Studio plugin instead… and got as far as getting syntax highlighting and building to kinda-work before moving on to something else. (Someday!)

So, a couple months ago, I had recently added a donation button to this blog.  A generous soul jumped on that right away.  I decided the bes...